It’s no secret that banks need to process stacks of incoming documents every day, which often requires a large mailroom team and can slow down processes. And this was certainly the case for Belgian bank and insurance company, Argenta. But now that’s a thing of the past; since implementing Docbyte’s intelligent mailroom, they’ve eliminated their backlog and reduced human errors while also streamlining their team. Smart algorithms mean the bank can now effortlessly serve clients faster and lay a solid foundation for further future automation and digitalization moving forward.

All the mail at Argenta previously had to be opened manually and examined for it to be assigned the right sorting code, before then being scanned and attached to the right dossier and employee. This was a repetitive, manual process which was prone to human error, as J. Gijs, Operational Team Lead Mailroom at Argenta, explains: “Getting a single document to the right place used to take three people. We had to open and read every letter to determine where it needed to go, which was very time-consuming – a process that was far from ideal and often resulted in backlog.”

“Nothing compares to the level of automation offered by Docbyte thanks to its use of machine learning. The demo convinced us it was the Rolls-Royce of intelligent mailrooms.”

Argenta chose to go down the digital transformation route to deal with their mailroom challenges. “Clients expect a level of service equivalent to big ecommerce businesses,” continues Gijs. “As a bank, we believe that automation is the way to go – for our mailroom, but also for our app and website flows which we’ve already digitized. Technology can help us to be more efficient and productive, and ultimately deliver the service clients expect from us.”

The Rolls-Royce of mailrooms

The bank and insurer sent an RFP to a wide range of companies in their search for a partner to help them achieve their automation dreams. And Docbyte’s response convinced them. Gijs: “We saw plenty of solutions, but nothing compared to the level of automation offered by Docbyte offered thanks to its use of machine learning. Their demo convinced us they had the Rolls-Royce of intelligent mailrooms and were the right partner for us.” 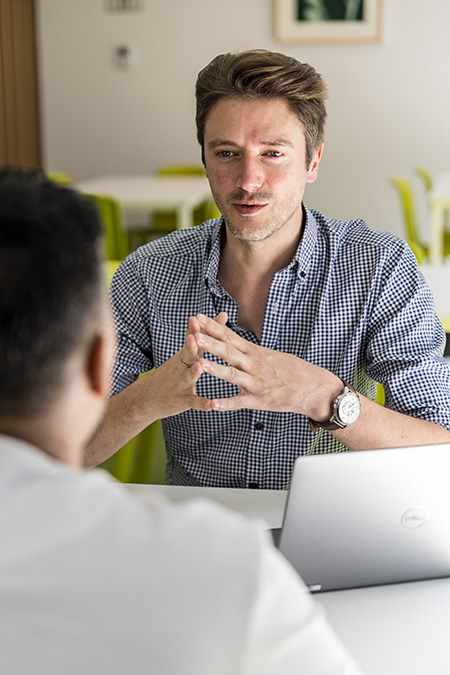 “Docbyte’s solution means we simply have to put our mail on a scanner – that’s the full extent of the manual actions our team needs to take,” explains Gijs. “Their extraction and classification algorithms take care of everything else for us. It even also recognizes case numbers – if there are any – and automatically assigns everything to the right dossier, all with an extremely high degree of accuracy thanks to machine learning.”

The automated mailroom means less manual intervention, so the team can process more with fewer people. Gijs: “We’re a big bank, and we get a lot of mail, so reducing the mailroom team by even just one person is a big deal. The fact that we’ve managed to reassign four team members was unfathomable before, but we’ve done it without compromising any speed or service for our clients thanks to Docbyte.”

With such a busy flow of incoming documents, requests could sometimes get stuck in the mailroom for a day or two before. But since implementing their new mailroom, Argenta has not only managed to catch up with this backlog, they’ve also not built up any more. “It means we can get a client’s documents to the right person as quickly as possible, which speeds up the handling of their request and provides them with faster and better service,” adds Gijs.

Any process involving people is prone to human error, and mailroom sorting is no different. Argenta, however, has all but eliminated these mistakes, says Gijs: “We started by giving Docbyte a big mail dump spanning several years to train the artificial intelligence behind their tool. It initially identified about 80 percent of documents correctly, but machine learning ensures the system is continuously improving and we’ve already managed to bump the accuracy up to over 90 percent now. We also have a fallback system in place, meaning we’re alerted to do a manual check if the algorithms can’t categorize an item of mail with sufficient certainty, resulting in a system that sorts all our documents from start to finish with little to no errors.”

“The fact that we’ve managed to reassign four team members was unfathomable before, but we’ve done it without compromising any speed or service for our clients thanks to Docbyte.”

Proactive and always there

Gijs and Argenta aren’t just singing the software’s praises; they’re also very appreciative of the partnership as a whole. Gijs: “We’ve been able to count on clear guidance from Docbyte from start to finish. One of their consultants even worked in-house to ensure we always someone on hand for questions or keeping us up to date, which also helped them get a good feel for how we work. Nothing was left to chance. They were proactive in tackling issues and solving them as quickly as possible.”

Gijs adds that Docbyte provided thorough training materials for his team: “Tools work best when people know how to use them. Docbyte therefore made sure my team had plenty of materials to help get them up to speed with the new software. They’ve truly become a great and long-term partner, something we very much appreciate.”

Expanding beyond the mailroom

For Argenta, automating their mailroom with Docbyte’s solution is just the start. “We’ve got the paper trail, but we’ve also got a couple of ‘digital trails’ as well, because clients can send us documents through a variety of channels. We want to have all these communications flow through Docbyte’s software in the future, so we can further improve our efficiency and service levels for clients,” concludes Gijs.

Gijs strongly believes you need to listen to and trust your partner: “Docbyte are the experts, so we let them guide us to our ideal solution. It’s true that some things might not turn out how you initially envisioned them, but we’re fully convinced that your partner’s expertise will lead you to a better result.”